'Violin' bookcase made for the Earl of Pembroke 1763, Wilton House.

Having written very recently on the late eighteenth-century inventory of Harewood House, Yorkshire, I thought this might be a useful adage to the Thomas Chippendale pool of knowledge! Although Chippendale, and his son Thomas Chippendale the Younger are well-known names – often overwhelmingly so, their craftsmanship still receives great interest. The following list is not exhaustive and there may be houses which have been wrongly linked with Chippendale, but I am dependant on a mixture of old and relatively up-to-date sources – besides I am no Chippendale expert!

As F. Gordon Roe points out in Old English Furniture, ‘…the tendency to label almost everything of certain types ‘Chippendale’ has robbed other leading craftsmen or designers of their due share of credit … On the other hand, some writers have perhaps tended unduly to minimize Chippendale’s importance, for though it is obvious that his firm could not have produced more than a fraction of the work so freely assigned to it, he was evidently a craftsman of outstanding merit.’ (p. 9) Not every commission was extensive, and some patrons may have desired only one or two pieces for their remodelled library or state rooms, others demanded entire suites of furniture. In either case, we should remember that Chippendale was not a lone craftsman and may rarely have even touched the pieces which left his London workshop. 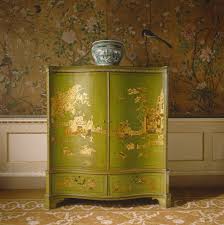 Half round or sidetables made for Denton Hall, now on display at Temple Newsam.

Oliver Brackett, Thomas Chippendale: A Study of His Life, Work, and Influence(1924). The Burlington Magazine. Vol. 122, No. 927, (June, 1980).
Anthony Coleridge, Chippendale Furniture: The Work of Thomas Chippendale and His Contemporaries in the Rococo Taste (1968).
Christopher Gilbert, The Life and Work of Thomas Chippendale,(1978).Peter Ward-Jackson, English Furniture Designs of the Eighteenth Century (1958).
Clifford Musgrave, Adam and Hepplewhite and Other NeoClassical Furniture (1966).
Links:
Thomas Chippendale on Wikipedia http://en.wikipedia.org/wiki/Thomas_Chippendale
Thomas Chippendale. The Gentleman and Cabinet-Maker’s Director: being a large collection of the most elegant and useful designs of household furniture in the Gothic, Chinese and modern taste. (1754). Digital Library for the Decorative Arts and Material Culture. University of Wisconsin.  http://digicoll.library.wisc.edu/cgi-bin/DLDecArts/DLDecArts-idx?id=DLDecArts.ChippGentCab

Useful biography of Thomas Chippendale (in need of modernising!) http://216.92.23.157/chippendale/chronology.htm